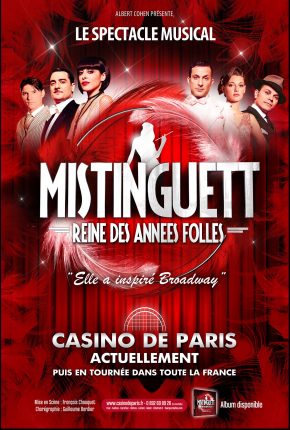 Some thirty artists on stage will relate the creation of the first music hall show in history, which inspired Broadway. It is on this journey that we wish to invite the spectator, sharing with him the extraordinary human adventure that Miss and her troupe are going to live onstage, up to the outcome: the curtain going up on the revue that will leave its mark on the whole history of the Music Hall.

Dazzling, talented, insolent… the 1920s were an exceptional time in our history.
Suddenly, Paris changed dramatically, plunging into a new era and definitively turning the page on the 19th century.

For after four years of a horrific war, French youth had only one obsession: forgetting this tragedy. The sole remedy was to celebrate, with the mad hope of inventing a new world, a world without war, a world of laughter and pleasure.

To describe the effervescence that took hold of the capital at the time, one word stood out beginning in the 1920s: Madness. Everything accelerated with the laying-low of pre-war values, the emancipation of women, dancing, partying, carnival. These ‘mad years’, as they were called in France, represented, in truth, a veritable cultural revolution, borne by a handful of visionary men and women. The extravagance and wild times of those years were theirs. Whether artists, scholars, writers, dancers, inventors or whatever, coming from all over the world, they turned their back on good manners and swept Paris into a swirl of colours and rhythm.
The Roaring Twenties were a parenthesis of freedom, a magical moment between two world wars, ten short years but a decade of unprecedented intensity. Mistinguett was the first queen of the music hall, the first to wear plumes and feathers and descend a grand staircase.
In the course of our history, she became the queen of the Années Folles (the Roaring Twenties) This was the period that, in 2014, is the issue of the hour. The art of living, sometimes of advancing in difficult times or simply surviving, resembles that of the 1930s This just goes to show how, in the 21st century, Mistinguett remains a thoroughly modern figure. Some of her songs such as “Mon homme” became international hits, and “My Man” was interpreted by international stars such as Billie Holiday, Ella Fitzgerald, Edith Piaf, Sarah Vaughan, Dizzy Gillespie, Diana Ross, Barbra Streisand, Lea Michele in Glee (season 2)…

As Robert Hossein’s assistant and collaborator in the theatre, he participated in the adventure of the great popular shows Danton et Robespierre, Shakespeare’s Julius Caesar, Cyrano de Bergerac and the premiere of Les Misérables.
Joining the team in 2000, he is the co-author of the librettos for Dothy et le Magicien d’Oz, Mozart l’Opéra Rock and 1789, Les Amants de la Bastille.

Journalist-editorialist for Le Figaro, writer, producer and director, Jacques Pessis is also an historian of French song, to which he has devoted some twenty books, one of them about Mistinguett, queen of the Années Folles (the Roaring Twenties). He has also written about the music hall at the time when Paris was truly the City of Light.

William is a composer, director, author and performer. He has written lyrics or composed songs for numerous French artists. He joined the team of composers for Mozart l’Opéra Rock and was also co-writer of a large number of the songs for 1789, Les Amants de la Bastille.

For several years now, Jean-Pierre Pilot has been active simultaneously as composer, arranger, programme planner and artistic director. He has worked with the crème de la crème of French singers (including the most contemporary, such as Zazie and Christophe Willem). He was co-composer of the complete soundtrack of Mozart l’Opéra Rock then of 1789, Les Amants de la Bastille.
The Années Folles or Roaring Twenties witnessed the beginnings of the Music Hall, a celebration, a newfound freedom full of musical discoveries and mixes. We are tackling the soundtrack of Mistinguett, Reine des Années folles with the twin desire of rediscovering this unforgettable perfume of great songs from the turn of the 20th century and of accompanying the narrative of the show in a modern, contemporary way.
From the nostalgia of a few songs of the period reinterpreted with the wild energy of original compositions, the score will evolve like film music, intense, emotional and swinging!
We propose a resolutely positive journey beyond time, even beyond memories, a recipe for dealing with the ‘crisis’. Could we not do with some ‘mad years’ today?

The Roaring Twenties are thoroughly topical: their spirit, madness, music, and fashions strongly appeal to today’s generations. They correspond to a spirit of joy, an art of living well of which we have a terrible need… Mistinguett… Her name has become a popular expression, and young and old pronounce it regularly.
Many people are familiar with Mistinguett’s songs, which have been heard round the world, without necessarily knowing that it was she who introduced them. Equally forgotten is what an exceptional woman she was: a strong, theatrical personality, and extremely modern. She was the queen of the music hall in the day when Paris was, for the whole world, the City of Light. She was also a queen of marketing, publicity and the ‘people’ press, well ahead of her time.
Intrigues linked to competition, jealousy and bitterness will add to a show that allows the spectator to experience an exceptional moment. He will, in fact, witness the gradual creation of the revue, in the venue where it was born: a way of finding oneself at the heart of the event, in the heart of the theatre that beats powerfully.