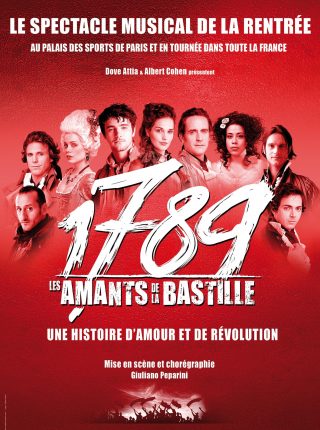 The wonderful costumes and a spectacular set designed by an award–winning creative team transported audiences back to the 18th century.

1789 LES AMANTS DE LA BASTILLE was in the making for over two years and filled audiences all around the world for many years.

Directed and choreographed by Giuliano Peparini, the show is a journey back to a time when a whole generation of people dreamt of changing the face of the world: the quintessential period of the French Revolution, from spring 1789 to August 26th 1789, date of the Declaration of the Rights of Man and of the Citizen.

Both our heroes live worlds apart. He, a young revolutionary peasant, she, one of Queen Marie-Antoinette’s maids of honour, will love one another passionately, until the dawn of a new world, full of promises of Freedom and fraternity between men.
This love story, a pure work of fiction, will interact with History. Thus will our two heroes live to meet King Louis XVI, Queen Marie Antoinette, Mirabeau, Danton, Camille Desmoulins and other Heroes of the Great Revolution.
Forty years later, as a worthy successor, Victor Hugo will write les Misérables to defend the common people and the oppressed. France, Spring 1789. Hunger and unemployment wreak havoc on the French countryside and cities. There are murmurings of revolt while in Versailles King Louis XVI’s Court, insolent and frivolous, keeps on dilapidating the State Treasury.
Out of two opposing worlds that fear and confront one another, Olympe and Lazarus should have never met. He, a young peasant rebelling against the injustice of losing his land, goes to Paris to conquer Freedom. She, a gentry girl, Governess of the Royal Children at Versailles, is devoted body and soul to the service of her monarch, Queen Marie–Antoinette. And yet…
In the midst of the fevers and swirl of the dawning revolution, Olympe and Lazarus will be plunged together into the wildest, most romantic plots. They will love one another with passion, lose track of one another before finding each other again. Following the most important characters of their times, such as Danton the great, Camille Desmoulins, the fiery journalist, or Jacques Necker, the very austere Minister to the King, they will live the throes of Great History.
Their love will take them to the morning of 14th July 1789, at the foot of one of the darkest and most mysterious prisons, the Bastille, to live the day that will seal their destiny forever and mark the rise of a new world, the flight of new promises of freedom and fraternity between Men.
Forty years later, as a worthy successor, writer Victor Hugo would write Les Misérables to defend the common people and the oppressed.

A young peasant, son of a farmer. He takes an oath on his father’s dead body, murdered by soldiers, to avenge him and win back the family land. He decides to go to Paris, where new ideas catch fire and where the revolt is growing against the French king’s absolute monarchy. On his way, he meets the beautiful young Olympe who will disrupt his life.

Governess of the Royal children, daughter of the King’s lieutenant at the Bastille. While serving her queen body and soul, she will experience the dilemma of loving one of those who want to overthrow the monarchy. Will she choose to live her love to the fullest?

Queen of France, arrogant and unfaithful?. The reversals of History will unveil the underside of a character full of doubts and nostalgia.

Lazarus’s sister, who will follow him to Paris. Abandoned by her brother, she will sink to being one of ‘the Palais Royal’s loose girls’. She will regain her dignity by taking the head of the women’s revolt that she will lead right up to the king in Versailles.

Lawyer, President of the fellowship of the rights of Man and citizen, he laughs loud, courtesies and drinks more than he should, but he’s also a tribe, he will be one of these men of action who will organize the people’s insurrection against the power of Versailles.

A young Parisian, ‘the Palais Royal kid’. The capital city is her realm, she knows everything and everyone knows her. She will be a friend and a precious help to our lovers.

Giuliano Peparini is considered one of the leading directors and choreographers of his generation.
At the age of 16, he was engaged by the professional theatre company ‘La Rancia’ to tour all round Italy in Michael Bennett‘s musical comedy A Chorus Line.
At the age of 17, he entered the School of American Ballet in New York. At the end of his course, he moved back to Europe where he attracted the attention of Roland Petit who engaged him in the Ballet National de Marseille. For three years, Giuliano performed the repertoire’s leading roles: Nutcracker, Carmen, etc. Roland Petit appointed him Principal Dancer in 1995; Giuliano was 23.
Strongly encouraged by Petit to create his own choreographies, Giuliano Peparini gave his first creation, Horses, at the Opéra National de Marseille in 1997. One year later, he became one of Mr Petit’s ballet masters and would work for the Opéra de Paris, the Bolshoi Theatre, the New National Theater in Tokyo, La Scala in Milan, etc.
In December 2001, he was in Saint Petersburg, at the Mariinsky Theatre where he premiered Loulou, the Dreams of an Anti-Star for the Kirov Ballet.
This opened up new perspectives to him. He collaborated with the Cirque du Soleil and, in 2004, met Franco Dragone (Cirque du Soleil – Céline Dion) with whom they share the same artistic views. Together, in 2005 they created Le Rêve, one of the most striking and poetic shows ever put on in Las Vegas.
In 2007, Giuliano Peparini staged an event featuring 150 artists for the opening of the Crown Macao Hotel in China.
Between 2009 and 2011 Giuliano joined Franco Dragone again as co-director and choreographer to create an outstanding new show, this time in Macao: The House of Dancing Water (the largest permanent water show in the world).
In 2012, Giuliano joined Dove Attia and Albert Cohen who entrusted him with the direction and choreography of their new musical show, 1789 les amants de la Bastille (elected Best Musical Comedy at the 2013 Globe de Cristal awards).

Dove Attia and Vincent Baguian unite their talents to write the lyrics to the songs of 1789, les amants de la Bastille. This collaboration, which already gave birth to most of Mozart the Rock Opera‘s lyrics, of which ‘L’assassymphonie’ and  C’est bientôt la fin‘, has become a unique and full-fledged signature. The duo of authors give a strong identity to the show and are a source of emotions brought to you all along the story.

After writing the libretto of The Sun King, and Mozart the Rock Opera, Dove Attia and François Chouquet joined again for the 1789 project to work on the dialogues and the dramaturgy of the libretto.

Referred to as the ‘Fabulous 5’. Rod Janois, Jean-Pierre Pilot, Olivier Schultheis, William Rousseau and Dove Attia are now indeed a proven team. Even though all these composers have their own personal careers with collaborations, successes, and experiences at the highest level, they still composed most of Mozart the Rock Opera songs together. Forming a close-knit small community of musicians, they joined again, this time to compose the songs for 1789, les amants de la Bastille. The musical atmosphere is one of melodious pop music tinged with a touch of electro and urban rhythms, an atmosphere that perfectly reflects the theme of the show, bringing it up to date.