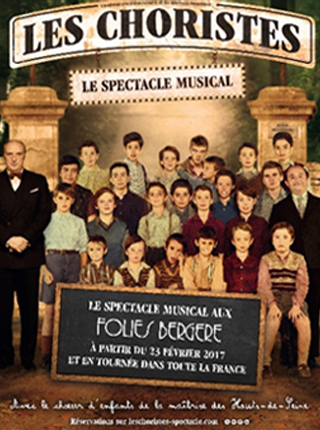 The film-phenomenon (15 million tickets and 4 million albums sold, two Oscar nominations), Les Choristes (in English: The Chorus) comes back to life on the stage of the fabled Folies Bergère.
Les Choristes, the musical show, will remain faithful to the spirit of the film with its colourful characters, the vocal performance of the children, and tunes everyone is familiar with, recreating all the emotions stirred by its universal story. But in addition, the show will be enriched with new scenes and songs written especially for the occasion.
In terms of production, this will be a veritable tour de force, with three teams of 15 children alternating for the acting and singing: a first in France. All come from the prestigious Maîtrise des Hauts-de-Seine, the largest children’s chorus in France, to contribute their valuable-participation. 1949. Clément Mathieu, an unemployed musician, accepts a position as supervisor in a boarding school for difficult young boys. Between disturbed kids and the hostility of the director; Rachin, a believer in strong-arm methods, Mathieu has trouble finding his place.
He then tries an experiment: initiating the boys in the practice of choral singing. His enthusiasm earns him their growing affection and the support of the staff, as well as Rachin’s animosity. One of the most withdrawn children, the young Pierre Morhange, nonetheless reveals exceptional gifts that Mathieu points out to his mother, Violette, who is bravely raising him alone and with whom Mathieu quickly falls in love. The chorale’s success is going to transform the children’s daily life and enable the school to avoid bankruptcy. But Mathieu’s success only kindles Rachin’s hatred, and he has not said his final word…

Director – Co-author of the libretto – co-composer

Coming from a family dedicated to the cinema and the theatre, Christophe initially studied classical guitar. At the age of 14, he enrolled at the Ecole Normale Supérieure de Musique, Paris, in the class of master Javier Quevedo who would guide him to a Concert Artist’s degree, unanimously voted first by the jury. The same year, he earned a state diploma as guitar professor. Then came years of concerts and international competitions.
Gaël Darchen
Director of the Maîtrise des Hauts-de-Seine
For 25 years now, Gaël Darchen has been carrying out musical projects with children and adolescents.
He was only 29 when he took over the Maîtrise des Hauts-de-Seine and, in a few years, turned it into France’s most attractive children’s chorus. Recognised as one of the leading specialists in children’s voices, the educational and musical project that he conceived for the Maitrise des Hauts-de-Seine is unquestionably a success.

The Maîtrise des Hauts-de-Seine
With its 500 children and young adults aged five to 25, the Maîtrise des Hauts-de-Seine has turned into a unique, multi-facetted instrument under the artistic and pedagogical direction of Gaël Darchen: from solo roles on opera stages to large oratorio choruses, there is hardly any vocal field that is denied it.
Years of high artistic standards and educational know-how indeed deserved a reward: officially named Children’s Chorus of the Opéra National de Paris in 1995, this ensemble henceforth leads the field internationally. From James Conlon to Seiji Ozawa and Valery Gergiev, from André Engel to Jean-Louis Martinoty and Patrice Chéreau, from José van Dam and Roberto Alagna to Natalie Dessay and Felicity Lott, the young choristers no longer count the stars with whom they have had the opportunity to collaborate or share the stage.
With their list of musical conquests boasting some thirty countries on the five continents, they are also wonderful ambassadors of French vocal music: the Aix-en-Provence Festival, Théâtre des Champs-Elysées, Opéra-Comique, Royal Theatre of Madrid and the Baalbek International Festival… prestigious invitations have not been lacking in recent years.
Further testimony to the musical quality of the Maîtrise des Hauts-de-Seine, just as much as its love of discovery, is its varied discography, boasting side by side Mozart and Britten, Pergolesi and Vivaldi, rock operas and soundtracks for the silver screen.
At the invitation of the President of the Departmental Assembly, the Maîtrise des Hauts-de-Seine will soon move to the Cité Musicale on Seguin Island on the outskirts of Paris.
Since 1985, the Maîtrise des Hauts-de-Seine is subsidised by the Hauts-de-Seine Departmental Council.

Rachin : Director of the Fond-de-l’Etang boarding school. A man of lost illusions, Rachin uses brutal, repressive methods to maintain his authority. Fossilised in his principles, Rachin symbolises the agony of an old-fashioned upbringing, unsuited for the slightest self-questioning.
Clément Mathieu : Failed musician and unemployed music teacher, Clément Mathieu is forced to accept a position as a supervisor in a boarding school about which he knows nothing. Through the practice of choral singing, he is going to turn the children’s daily life upside down and find new meaning in life.
Pascal Mondain : A rebellious, violent adolescent, considered irredeemable, Mondain manages to upset the fragile equilibrium that Mathieu had succeeded in imposing. Wrongly accused of theft by Rachin, his revenge will have weighty consequences.
Violette Morhange : A single mother, courageous and worthy, Violette Morhange visits her son, Pierre, every week whilst working hard to earn a living. With his asocial behaviour, Pierre expresses a confusion for which he holds his mother responsible. Discovering the boy’s gifts, Mathieu will also become responsible for bringing them together.
Father Maxence : Guardian and the school’s jack-of-all-trades, Father Maxence is resigned to suffer the methods of Rachin whose whipping boy he is. A man of heart, full of humanity, he is going to turn out to be an ally for Clément Mathieu.
Professor Langlois : Teacher of maths close to retirement age, Langlois seems to have made a speciality of avoiding the worst, without making waves. The arrival of Clément Mathieu is going to make him aware of the Director’s abusive methods and also awaken the artist that lay dormant in him.
The children’s chorus : Some 15 children onstage, coming from the prestigious Maîtrise des Hauts-de-Seine, selected for their singing talent as well as acting, will relay each other in the emblematic roles of the children in the film.
One will again find Pierre Morhange, Le Quellec, Pépinot, Corbin, Delaire, Doublet, Gaudi…