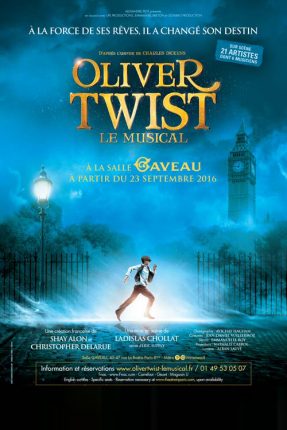 With passion and genius, a company of 15 actor–singer–dancers and an orchestra of six musicians are doing a new take on Charles Dicken’s masterpiece. When a monument of classic literature immerses us in the depths of 19th-century London… When sometimes the blackness, sometimes the brilliance of Dickens’s characters vibrate in unison with woodwinds, strings, brass, keyboards and percussion… The magic could not work better than at Salle Gaveau. Its old-fashioned charm and exceptional acoustics give their full quintessence to this little gem in which the appeal of the story and the quality of the performance will move spectators of all ages, from the youngest to the oldest. More than a musical, this show is a race for Life: from birth, Oliver struggles to make his way and overcome dangers, obstacles, and manipulations, one by one. It is this incredible and gripping journey, written and set to music by Christophe Delarue and Shay Alon and directed by Ladislas Chollat, that Salle Gaveau, listed as an historic monument, enables you to live deeply since 23 September 2016. It was in Israel that I set about creating Oliver Twist for a production that never saw the day. The idea, which stayed in a corner of my mind, became a project seven years later with Christopher Delarue. We decided to keep the musical basis and rewrite our own show. The touching story, full of colourful characters, very quickly inspired the musical composition. Through it, I wanted to bring out the blackness of the story as well as the hope of this child faced with the miserable reality of the 19th century. I hope I have succeeded in adding a touch of humour and sarcasm that the work deserved.

Author, lyricist Oliver Twist is a very lovely story. A dark story, too, in which words are not afraid of being said, where violence goes far beyond the idea one might have had of it. For me, accompanying Shay Alon in writing this musical comedy was a challenge taken up without the slightest hesitation. I didn’t want to write a children’s story, watered down, light and carefree. Ill-known in France, this major work by Charles Dickens is an integral part of Anglo-Saxon culture. I wanted to let it be (re)discovered at Salle Gaveau and accompany its success – I hope – far and wide!

Director Before the book, it was Shay Alon’s music and Christopher Delarue’s writing that charmed me. Their joint work sounds like a revelation of Dickens’s novel. The libretto preserves the essential part, while the music adds poetry, emotion, and humour, tinged with modernity. Oliver Twist cruelly echoes our era, the work having doubtless never been so contemporary. I drew my desire to stage this project from the musical energy given off by Shay and Christopher’s fantastic work. In my staging of Oliver Twist, I try to show the world of Dickens through the eyes of the child who discovers it. I ask the actors to adopt a realistic approach, accentuating the strokes of the drawing without ever lapsing into caricature. I want everything to be real and for the spectator to feel hunger, the cold, the distress, and experience this terrifying world depicted by Dickens. I want the sung moments to transport us elsewhere, making us dream fully before coming back to crass reality. Sequins and lights in the midst of the dust and dirt. Publicity posters, engravings and pages torn from the novel will provide the stage’s aesthetic unity. There will be several levels in the set. On top: the well-to- do classes; below: the world of thieves, on the apron, the street, which will be extended in alleys on both sides of the spectators. The stage will be empty at the beginning of the show, full at the end, with all the set elements that will have accumulated: cases, coffins, chests and suitcases. But here the paupers will not be dressed in brown as they are too often in film. Misery will be in colours, for although the poor have little or nothing, no one can take that away: colour. Or the desire – and need – to dream of better days.

THE RESONANCE OF DICKENS’S NOVEL

The morale of the story of Oliver Twist could be summed up in a single phrase: through the strength of his dreams, he changed his destiny! In 2016, more than ever, hope is a vector of current times, a commonly expressed need, regardless of generation, community or identity. Everyone, large and small alike, can find a part of him- or herself in the character of Oliver. Oliver goes through a series of ordeals that, rather than discouraging him, make him stronger. Hunger, fatigue, cold, slavery, and the absence of family are so many scourges that this young boy has to face alone. More than once, Oliver could have let himself die, yet his strong spirit and exceptional courage enable him to surmount the obstacles and confront adversity. With amazing accuracy, Dickens’s work depicts the world of today: its blackness, vices, and pitfalls. Men are manipulators, thieves, impostors. Nonetheless, it suffices to read between the lines to glimpse benevolence and sometimes laugh at the ridiculousness of absurd situations or grotesque, caricatured characters. In the final analysis, it is this ambivalence that makes Oliver Twist, the musical a true entertainment that makes us weep as much as laugh.