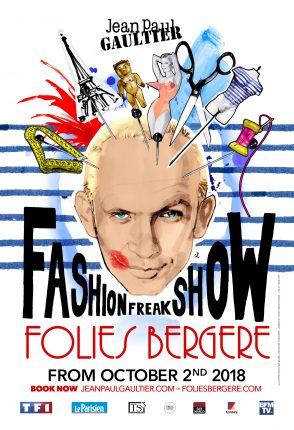 Eccentric, scandalous, provocative, exuberant and funny as ever, Jean Paul Gaultier is shaking up Paris once again by inventing a new kind of entertainment between a revue and a fashion show.  In this extraordinary production, actors, dancers and circus artists will take to the stage and play outlandish, passionate, larger than life, rude, sexy, sassy creatures and personalities. As author, director and set designer, Jean Paul Gaultier takes a look at our times in both an extravagant and tender way, and invites us behind the scenes into his world ﬁ lled with excess, poetry and magic. From his childhood to his early career, from his greatest fashion shows to the wild nights in Le Palace or London, Jean Paul Gaultier shares his journal of the times and pays tribute to those who have inspired him in ﬁlm (Pedro Almodovar, Luc Besson), music (Madonna, Kylie Minogue, Mylène Farmer) and dance (Régine Chopinot, Angelin Prejlocaj). In this show, thought out like a grand party, Jean Paul Gaultier will surprise us yet again. For this occasion, he designed tens of new exclusive outﬁ ts to incorporate within an exuberant scenography – without forgetting to invite his most iconic creations! To carry through with this project, he collaborated with the best in their ﬁeld, such as actress, scriptwriter and director Tonie Marshall, who co-directs the show, and Marion Motin (Madonna, Christine and the Queens, Stromae, RESISTE, the musical…) for choreography. From disco to funk, from pop to rock and also new wave and punk, the Fashion Freak Show is an explosive playlist of hits that have inspired the artist throughout his life. As Music producer and director, Nile Rodgers produces the soundtrack including writing two original songs! A great festive moment to enjoy irresponsibly!

A message from Jean Paul Gaultier

« I discovered the entertainment world at the age of nine while watching a Folies Bergère revue on TV. And I found out what a fashion show was through Jacques Becker’s ﬁlm, “Falbalas”, in which Micheline Presle falls in love with a fashion designer played by Raymond Rouleau… With the Fashion Freak Show, I intend to bring these two worlds together. It is very exciting to be given the opportunity to stage the revue in the Folies Bergère. This show is the story of my life, things I have experienced, seen and loved. And also stories that I have never told before! I will tackle new issues such as plastic surgery and the creatures it spawns, or the vanity fair of social media. All that has been an inspiration for a number of new costumes. Clothes can say so much about their time, the way we relate to femininity and masculinity, sexuality, about what we consider different and where the limits of society are. I want to show difference. For there is beauty to be found everywhere, it all depends on how one chooses to look at it. I’ve always loved freaks, weirdoes, agitators, the mixing of different aesthetics, the unexpected encounters. This transgressive energy will be on show for all to see. It will be about joy and dreams, I would like every member of the audience to leave in a happier mood than when they arrived. It’s going to be a huge party! I hope that the audience will enjoy the show just as much as I did when creating it. »